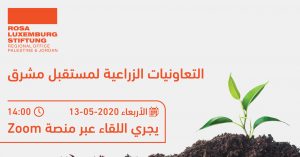 Rosa Luxemburg Stiftung (RLS) held a panel on Wednesday, 13 May 2020, titled “Agricultural Cooperatives Towards a Bright Future”. The panel was held via the ZOOM app and was simultaneously broadcasted on the foundation’s Facebook page. It discussed the legal status and policies related to cooperative work, as well as the current situation and aspired future of agricultural cooperatives.

The first panel speaker was Dr. Sa’ed Jasser Durra, who works in the field of development and institutional capacity-building and has conducted a number of studies and researches in the developmental and economic fields and in Palestinian cooperative action. The second speaker was Dr. Jamil Harb, Professor of Plant Biology in the Department of Biology and Biochemistry at Birzeit University, who is a researcher in several fields such as the role of agricultural cooperatives in the marketing of fresh plant-based products. The online panel was chaired by Mr. Sari Harb, RLS Solidarity and International Dialogue Program Manager.

Dr. Durra mentioned the different sectors covered by cooperatives, while indicating that agricultural cooperatives are the largest in number followed by housing cooperatives. In terms of the legal and policy-related framework, Dr. Durra stated that the Palestinian cooperatives law – whose purpose is to promote and organize the work of cooperatives – introduced a new stage in the history of cooperative action. However, he noted the presence of several gaps in this law which should undergo some reforms. The speaker concluded his lecture by stressing the importance of changing the stereotypes related to cooperatives because these stereotypes decrease the level of trust in cooperatives and reduce the investments and participation in them. Dr. Durra also presented some statistical data and indicators which showed the low rates of women’s participation in [Palestinian] cooperatives.

In the second part of the panel, Dr. Jamil Harb spoke about the agricultural cooperatives in Palestine. This was initiated by presenting an overview of the agricultural sector and highlighting the moral significance of this sector since the land is the symbol of Palestinian steadfastness in the face of the occupation. Moreover, he emphasized the economic value of the agricultural sector, which comprised 759 million U.S. Dollars in the Gross Domestic Product (GDP) of 2016. Dr. Harb also pointed out that agriculture in Palestine contributed to more than 50% of the Palestinian GDP before the occupation of 1967. However, this contribution decreased to less than 6% of the Palestinian GDP in 2012.

Dr. Harb also touched upon a number of problems that face this sector, such as the politicization of many cooperatives; disregarding the principles of transparency, democracy and accountability; ease of obtaining financial support from donors (“easy money”), and the absence of vision among most cooperatives.

The speaker also noted that agricultural cooperatives have a real opportunity to fairly distribute profits and limit the control of businessmen and investors. At the same time, he stressed the importance of strengthening the level of knowledge to enhance the efficiency of cooperatives by using what he calls “the great hidden potential”.  He also gave credit to several successful cooperatives in different Palestinian cities and villages as he considers them to be successful models that are beneficial to others.

The panel was attended by a number of concerned parties, scholars and experts in the cooperative field who also talked about their experiences in cooperative action and their research interests in this subject.

Mr. Issa Rabadi, Director of the RLS Social and Economic Rights Program, saw this panel as a great opportunity for RLS to discuss this subject and enhance this field in the future through the foundation’s projects and activities. Moreover, the RLS Solidarity and International Dialogue Program Manager, Mr. Sari Harb, stated that this panel comes in the framework of the foundation’s strategy of providing a space for discussing these subjects which are recently gaining a greater importance amidst the deterioration of the Palestinian economy as a result of the COVID-19 crisis and the occupation’s practices. This requires the enhancement of Palestinian self-reliance and the mobilization of people’s hidden potential to contribute in alleviating poverty and unemployment and enhancing social justice.

This panel discussion was held as a part of the Solidarity and International Dialogue Program of Rosa Luxemburg Stiftung (RLS), a German organization that has been working in Palestine since 2008. The Program aims to disseminate political education and social critique, encourages critical reflections on society, and sponsors networks of social, political, cultural and emancipatory initiatives. It does so through a number of programs, including emancipatory education, economic and social rights, solidarity, and international dialogue.