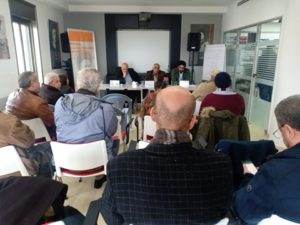 Dr. Abdul-Sattar Kassem started the panel by discussing the numerous factors and parties that affect the various mobilizations in the Arab World, which make it hard to make any future predictions. According to Kassem, the international arena is passing through a state of instability as a result of the United States foreign policy which is governed by “the temperament of U.S. President Donald Trump, who deals with politics with a businessman’s logic”. Dr. Kassem added that “the state of instability is not confined to the Arab World but is also seen in other parts of the world, such as the trade war between China and the United States, the U.S. withdrawal from the [Paris] Climate Agreement, and other actions that increased political tensions on the global level”.

With regard to regional developments, Dr. Abdul-Sattar Kassem highlighted that “the first wave of Arab mobilization did not lead to any positive results and had several dilemmas, including the fact that it had no leaders and no programs; thus making it easy to be penetrated by some parties”. He also spoke about the second wave of Arab mobilization which was characterized as being calmer and more peaceful, which is why it was more successful, as in the case of Algeria. Kassem also stated that these two waves of Arab mobilization emerged as a result of the Arab regimes’ failure to fulfill the hopes and aspirations of the people.

With regard to the Palestinian cause, Dr. Kassem mentioned that “the region has witnessed a change and the United States and Israel are not as powerful as before, and the best proof of that is the Gaza Strip, South Lebanon, and Syria”.

On his part, Dr. George Giacaman saw these mobilizations as the most important regional event in the 21st century. He also noted that it is difficult to predict revolutions and it is hard to achieve revolutionary objectives. For example, he mentioned how it took the French Revolution of 1789 a long period of time to transform France into a real republic. In his analysis of the current situation, Dr. Giacaman divided the Arab mobilizations to two groups. The first group included Tunisia, Sudan and Algeria, which he saw as countries that are closer to achieving social justice than the other Arab countries that underwent revolutions.

Dr. Giacaman also mentioned the highly negative effect of foreign actors, such as Arab Gulf states, on the mobilization of Arab peoples, whereas he considers these actors as counter-revolutionary elements. According to Giacaman, “the mobilization of people in Syria and Libya was transformed to proxy wars as a result of foreign interventions”. In conclusion of his analysis of the recent regional events, he stated that “the Arab World is in throes and this will continue, thus requiring more time for us to draw conclusions”.

With regard to the Palestinian cause, Dr. Giacaman stated that “the Deal of the Century further clarified what was already clear, which is that the two-state solution has ended. The more important question that we should think of is: What will the future Palestinian national project be in light of this reality? Unfortunately, there is not much thought in this direction”.

Mr. Sari Harb, RLS Solidarity and International Dialogue Program Manager, commented that this panel discussion is part of the RLS strategy to provide a space for political and social dialogue. Harb added that “we live in a region that is undergoing countless changes and Palestine is affected by each and every one of them. For this reason, we have organized this panel in an attempt to understand what is going on in the region and the effect of that on the Palestinian level.

This panel discussion was held as a part of the Solidarity and International Dialogue Program of Rosa Luxemburg Stiftung (RLS), a German organization that has been working in Palestine since 2008. The Program aims to disseminate political education and social critique, encourages critical reflections on society, and sponsors networks of social, political, cultural and emancipatory initiatives. It does so through a number of programs, including Emancipatory Education, Social and Economic rights, and Solidarity and Unternational dialogue.