“Why Don’t We Ask?” – A Youth Art Exhibition that Breaks Stereotypes and Promotes the Freedom of Criticism 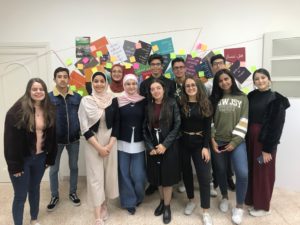 Upon entering the corridors of the “Why Don’t We Ask?” exhibition, visitors are confronted with a series of questions. “What is the relation between authority and knowledge?” is one of the questions asked.

This exhibition was organized by Tamer Institute for Community Education, in culmination of the youth group activities held in Ramallah, Gaza and Hebron, respectively. The activities lasted for approximately one year and were in the framework of a larger project that aims to enhance critical thinking and promote a culture of asking questions. This project, supported by Rosa Luxemburg Stiftung (RLS), was recently launched in the city of Ramallah.

The questions that were raised are quite diverse in nature; they include cognitive, existential, cultural, philosophical, political and social matters. Initially, the questions were primarily focused on issues and types of education, yet they soon developed into artistic representations which amalgamated in a visual collection – producing a unique demonstration in both form and content.

The questions surrounding the exhibition came in all forms, colors, and shapes. Explorations included queries such as: What do we mean by humanizing humans?… Why are we here?… Why did we come to this world?… Why do we advance in age?… What is the end?… Does fear get inherited?… Why are we afraid of freedom?… Do we believe in poetry or [real] history?… What do we mean by cultural monopoly?… Who sets our limits?… Where do meanings come from?… Are there things worth dying for?… Who is to blame for having 45 students in one classroom, and who will compensate us for that failure later?… Can I as a student have ownership over the knowledge that I give to my teacher?… Why do men usually cry in secret?… Is history really a lie?… Why do we learn?… How can we transform education into resistance?… Why do I have to make concessions in order to do something that I like?… These questions, inter alia, reflect the great level of awareness among the students – both female and male – aged 16 to 21. They also exhibit how, unlike the older generation, the students were open in asking those questions and did not restrict themselves to political, social and religious preconditions.

Renad Qubbaj, General Director of Tamer Institute for Community Education, noted that critical thinking lies at the heart of this multi-oriented exhibition. This was in spite of the fact that the exhibition’s main focus was on education; a subject matter that the exhibition’s visitors will find many questions revolving around. The route of exploration and asking questions, Qubbaj mentioned, begins in confronting rote learning which [unfortunately] is the predominant method of education in Palestinian schools.

The exhibition’s large number of questions, Qubbaj added, showcases levels of progression. To come up with answers to the posed questions, after all, stimulates thought patterns which move toward pluralism and diversity rather than be limited to the “single answer” approach that does not give any chance for other interpretations. She highlighted that it is important for us to steer the Palestinian youth away from the one-dimensional knowledge approach so that they become more pluralistic and open to diverse knowledge. As such, the exhibition poses complex questions to encourage critical and analytic thinking.

Furthermore, Qubbaj noted that it must be feasible for the students to contact officials if need be, and those in charge may positively accommodate their will. “The questions raised in this exhibition,” she explained, “would broaden dialogue with decision-makers and promote various discussions inside the society. Besides education,” she noted, “there are hundreds of questions that have been raised on several subjects including community, cognitive, cultural and existential matters. I see that dialogue with official parties and within the society is an integral element for strengthening the level of interaction with the questions that the youth addressed in this exhibition. This is particularly significant in light of the fact that posing questions is not part of our general culture; neither at home and school, nor in the public sphere.”

On her part, student Bisan Safi, who was the leader of Ramallah’s “Palm” group that played a pivotal role in this exhibition, pointed out that the exhibition came as a result of the liberal education project. “We had no idea about this approach to education at first,” she mentioned, “We are now in the process of understanding, and have thus not yet attained a clear-cut definition of what this type of education means.” Safi also noted that some of the questions, which could not be answered in the discussions between group members, are now hung on the walls and in various spaces in the office of Tamer Institute for Community Education in Ramallah.

Rashid Qubbaj, who founded the aforementioned group about two years ago, pointed out that many questions in this exhibition either do not have categorical answers or have multiple answers, thus leading to some controversy and disagreement. Such conversations and debates emanating from our exhibition’s questions are significant for the audience, as they aim to transform the community culture into one of asking questions.