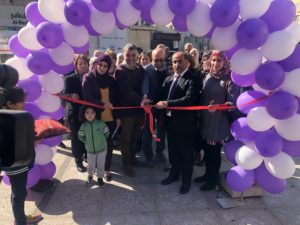 On Sunday, the 1st of December 2019, the Association of Women’s Action for Training and Rehabilitation (AOWA), which is a partner of Rosa Luxemburg Stiftung (RLS), inaugurated a trade fair for the network of women’s cooperatives. The trade fair, titled “Promoting the Role of women in Cooperative Action,” was held in Baladna Center in Al-Bireh.

The aim of this trade fair is to raise the level of Palestinian women’s awareness about cooperatives toward economically empowering women, increasing the productivity and efficiency of cooperative societies, and strengthening the role of cooperative action in Palestine. Enhancing the work of cooperatives is relevant, seeing that it has a role in boosting national economy and can be used as a means to nurture the resilience of Palestinians and eliminate their dependency on the Israeli occupation.

During this event, Sawsan Shunnar, Director of the Association of Women’s Action (AOWA), welcomed the attendees and thanked the sponsors and supporters of this trade fair. Shunnar also discussed the plans and programs of AOWA to raise the level of awareness about cooperatives for the purpose of empowering women economically, increasing the productivity and efficiency of cooperative societies, and enhancing the role of cooperative action in Palestine. After all, cooperative action is considered a lever of the national economy, and it is a means to enhance the resilience of Palestinians. It could also be used as a tool to eliminate the dependency of the Palestinian economy on the Israeli occupation that imposes harsh restrictions, harmful blockades and arbitrary measures against the Palestinian people.

On his part, the Palestinian Minister of Agriculture, Riad Attari, highlighted the importance of enhancing cooperative action as a framework and path towards achieving development and strengthening a resilient Palestinian economy. In doing so, the Palestinian people would deem victorious in the face of the oppressive economic measures of the Israeli occupation.

The Minister of Agriculture mentioned the important contribution of cooperatives in raising the awareness of Palestinian women about their pivotal role in social and political affairs, thus enabling them to play an active and leading role in the Palestinian society. Attari also noted that the Palestinian government aims to solve the problem of unemployment among Palestinian graduates by orienting them to work in land cultivation and agricultural projects in the Tubas and Jordan Valley areas, and he reiterated the Ministry’s commitment to support women’s cooperatives.

Issa Rabadi, Program Manager of the Rosa Luxemburg Stiftung Regional Office Palestine and Jordan, spoke about the positive experience of the Association of Women’s Action (AOWA) in the field of cooperatives and its great role in encouraging productive activities and establishing a network of cooperatives. Rabadi also stressed that Rosa Luxemburg Stiftung (RLS) will continue to provide all possible support for promoting this developmental orientation on the national level.