The Israeli Elections: A race for War and Colonization 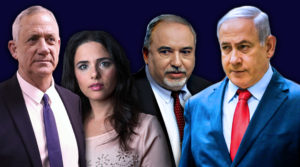 The Israeli elections will be held for the second time this year on September 17, 2019, with 32 electoral lists competing for 120 seats. The elections come after less than five months since the April 9 elections of the same year. They will be held in the wake of the failure of Benjamin Netanyahu, the Likud leader, who was tasked by the head of state to form a government after the Israeli majority’s recommendation to form a right-wing government under his leadership. Netanyahu’s efforts have failed as a result of the stalemate of talks between him and the Yisrael Beiteinu party, led by Avigdor Lieberman, who presents himself as the representative of the secular right wing.

Lieberman claims that his refusal to join the right-wing government, which Netanyahu started to form despite the intersection with the right-wing settler ideology he holds, is mainly linked to his demands to recruit the Haredim  [the ultra-Orthodox] and, in general, to his refusal to give a hand to the transformation of “Israel into a Halakha” (Jewish religious law and custom state). However, most of the analysts stated that this is just a false argument used by Lieberman as a cover-up and that the real reason he would not join the right-wing government which Netanyahu had sought to form with the Haredim is personal and connected to the presence of a deep rift between Lieberman and Netanyahu. Regardless of the real reasons why Lieberman is reluctant to join a Netanyahu-led government, going to new elections – after the horizon of forming a government was closed – surprised all observers, analysts and politicians, and again led to the re-mixing of cards. The re-elections have given the chance, especially for parties, to rethink their alliances, which resulted in the reformation of alliances that had disintegrated and the dissolution of others that have proved to be ineffective. The failure to form a right-wing government by the right-wing Lieberman has also contributed to paving the road for new coalition options, most important of which is the formation of a national unity government from the Likud and the Blue and White.

The environment of the electoral competition this time, much like the previous one of April, is characterized by severe polarization. The general climate is largely overshadowed by the preoccupation with internal and personal conflicts, not to mention the reluctance of the opposition to seriously discuss political issues related to occupation and the future of the Palestinians while contenting itself with proposing ambiguous formulas.

Follow-up on the general election discourse shows that the Palestinians are present in a weak or secondary manner. If present, their presence is regarded either as a nuisance that must be blocked, a security problem that must be addressed, or simply as a blind spot. In the new rhetoric vis-à-vis the Palestinians, there is an absence of dealing with them as human beings; as people living under occupation, and there is certainly an absence of any moral or human rights debate related to them and their lives.

What draws attention in the political discourse is the emergence of power, security, and deterrence vocabulary within the rhetoric of the opposition. This is represented by the Blue and White Alliance, which tries to manifest itself as a strong coalition capable of confronting the threats against Israel while simultaneously shunning the claim of being leftist; an accusation that Netanyahu is trying to attach to the Blue and White after turning the description of “leftist” into an accusation and transforming the talk about occupation into a source of embarrassment that should be avoided. The opposition makes it clear that it supports keeping the settlement blocs and a united Jerusalem.

Interestingly, these elections demonstrate how political axioms have shifted from the periphery to the center. Axioms related to the imposition of sovereignty on the West Bank have shifted from words being used by extremist and marginal settler groups to become centralized and legitimate; placed at the heart of Netanyahu’s and Likud’s rhetoric – which is also characterized by populism, incitement, and mobilization against his opponents in general and Palestinians in particular.

The Likud has not published an election program since 2009, in which it had put the Iranian issue at the top of its priorities and made it clear that it rejects any further withdrawals. Meanwhile, the most important pillars of the party’s ideology within its own constitution that the party has published on its site include: bringing together the Jewish people in the Land of Israel, and preserving liberal values and the integrity of the Jewish homeland. Surely, speeches, statements, and election programs are a reference to understand the orientations of parties running in the elections, especially the opposition, yet it is the actual practice of Netanyahu (who holds the government) and his statements that are in fact the most important reference.

In this context, we can see that Netanyahu, who announced – at the first Bar-Ilan University speech in June 2009 following his election and the formation of a government under his presidency and under Obama’s administration pressure – his acceptance of a solution based on the existence of a demilitarized Palestinian state alongside the Jewish state, has systematically emptied this statement of any content. While a decade ago Netanyahu has shifted international attention from the Palestinian issue to the Iranian threat, he has, at same time, sought to intensify settlements so much so that he no longer remembers what he had said at Bar-Ilan’s speech. With Trump on the rise, Netanyahu moved to adopt a fierce right-wing settlement policy accompanied by a gradual escalation of statements on annexing settlement blocs and imposing sovereignty on settlements. At the end of 2017, the Likud Central Committee voted by a large majority on imposing the Israeli sovereignty on the West Bank, and on September 1, 2019, Netanyahu stated that he will work on imposing “Jewish sovereignty” over settlements and that there will be no dismantling of any settlement.

This right-wing settlement approach is very similar to the Yemina Settlement coalition’s program, as expressed by the leaders of the coalition, which calls for “supporting the imposition of Israeli law on Judea and Samaria. ”

As for Yisrael Beitenu, led by right-wing and secular Lieberman, the party has an “ambitious” political agenda aimed at transforming Israel from a small state into a regional superpower by removing existing threats and preventing future confrontations. To achieve this end, the party put forth a power-based program, using vocabulary that reiterates decisiveness, expulsion, death, and destruction.  According to the program, the first phase is the end of terrorism by terminating the transfer of funds to Hamas, the deduction of terrorism money from the money brought and transferred to the Authority, the enactment of the execution of saboteurs law, the expulsion of instigators, the demolition of terrorists’ houses, and the return of the assassinations of terrorism leaders. In the second phase, the party will work towards a regional settlement. Unlike other parties, Yisrael Beitenu believes that Israel’s conflict is not a territorial conflict with “our Palestinian neighbors” but rather a three-dimensional conflict: a conflict with Arab states, Palestinians, and the Arabs of Israel. In this respect, the party sees that the settlement with the Palestinians “must be part of a comprehensive settlement that includes agreements with Arab countries and the exchange of land and residents of Israeli Arabs.”

In contrast to the clear political proposals of the right in dealing with the Palestinian issue and occupation through annexation, the imposition of sovereignty on the occupied territory, and the adoption of the iron fist policy, the opposition, led by Gantz, adopts an excessively broad and ambiguous political discourse which deals with the Palestinians primarily as a security issue that must be addressed by stressing the deterrence method. The Gantz-led Blue and White program mentions that the coalition will lead a policy based on taking the initiative and responsibility to work towards changing the reality in the Middle East and the country’s borders by restoring deterrence in the south through pursuing an independent security policy in confronting the Gaza Strip. It will thus contain “a policy with no tolerance at all towards provocation and violence against us.” The part also pointed out that it will work to preserve settlement blocs, the united Jerusalem, and the Golan.

As for the Labor-Gesher Alliance, it has chosen to completely turn a blind eye to occupation in its published electoral program, and has chosen to instead focus on the socio-economic issue; demanding investment in workers, patients, children, young couples, and improving working conditions and fighting poverty. The program is devoid of any mention of occupation and the Palestinian question and it completely ignores them.

The Palestinians are also absent in the proposals of ultra-Orthodox religious parties, including the ultra-Orthodox Shas and Yahadut Hatorah, which represents the Ashkenazis, that as usual do not publish their programs. According to a statement by an MP for Yahadut Hatorah, the party “traditionally refrains from taking a stand on security and foreign affairs issues. In this framework, the party has trust in the security apparatus and the prime minister. When an issue is put to a vote in the Knesset, we will present it to the Council of Rabbis, take instructions from them, and vote accordingly.”

The Democratic camp, which is formed of the Meretz coalition and Barak’s party, has not yet published its electoral program in detail. However, it was noted in the alliance agreement that it will work on the cancelation of the nation-state law and will fight against transforming Israel to a Halakha state and preserve its democracy.

Regardless of who is going to win in the elections and form the government, we can sum up – on the basis of election programs and the discourse of parties – that there are pillars characterizing the Israeli discourse today, once exclusively monopolized by the right, that have now become the general pillars:

In this context, the Palestinians find themselves confronted with two main streams: The first proposes the imposition of sovereignty on the occupied territory and placing them before a fait accompli as second-class population (apartheid de jure). The second is a stream that proposes more procrastination, deterrence and discipline, which means keeping the situation as is at best, i.e., apartheid de facto. As for the occupation itself and the right to a decent life and human rights… these issues are already out of discussion.

Director General of the Palestinian Forum for Israeli Studies (MADAR). She received her PhD in Sociology from Hebrew University in 2004. She has published several articles and research studies covering Israeli occupation and colonization in Palestine.

The Rosa Luxemburg Stiftung is one of the major institutions of political education in the Federal Republic of Germany. it serves as a forum for debate and critical thinking about political alternatives, as well as a research center for progressive social development. It is closely affiliated to the German Left Party (DIELINKE).

The Rosa Luxemburg Stiftung has supported partners in Palestine since 2000, and established the Regional Office in Ramallah in 2008.Today, the office is in charge of project cooperation with partners in the West Bank, in East Jerusalem, and in the Gaza Strip as well as in Jordan. 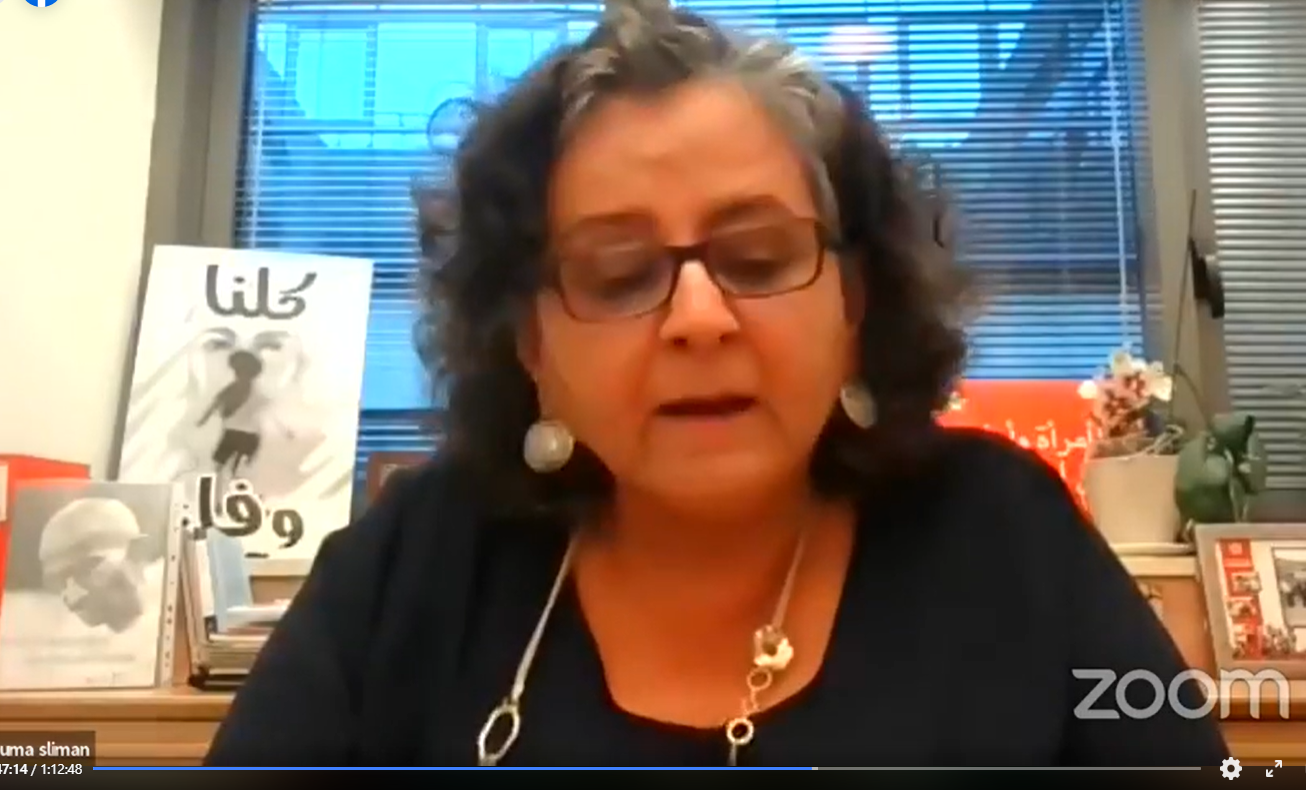 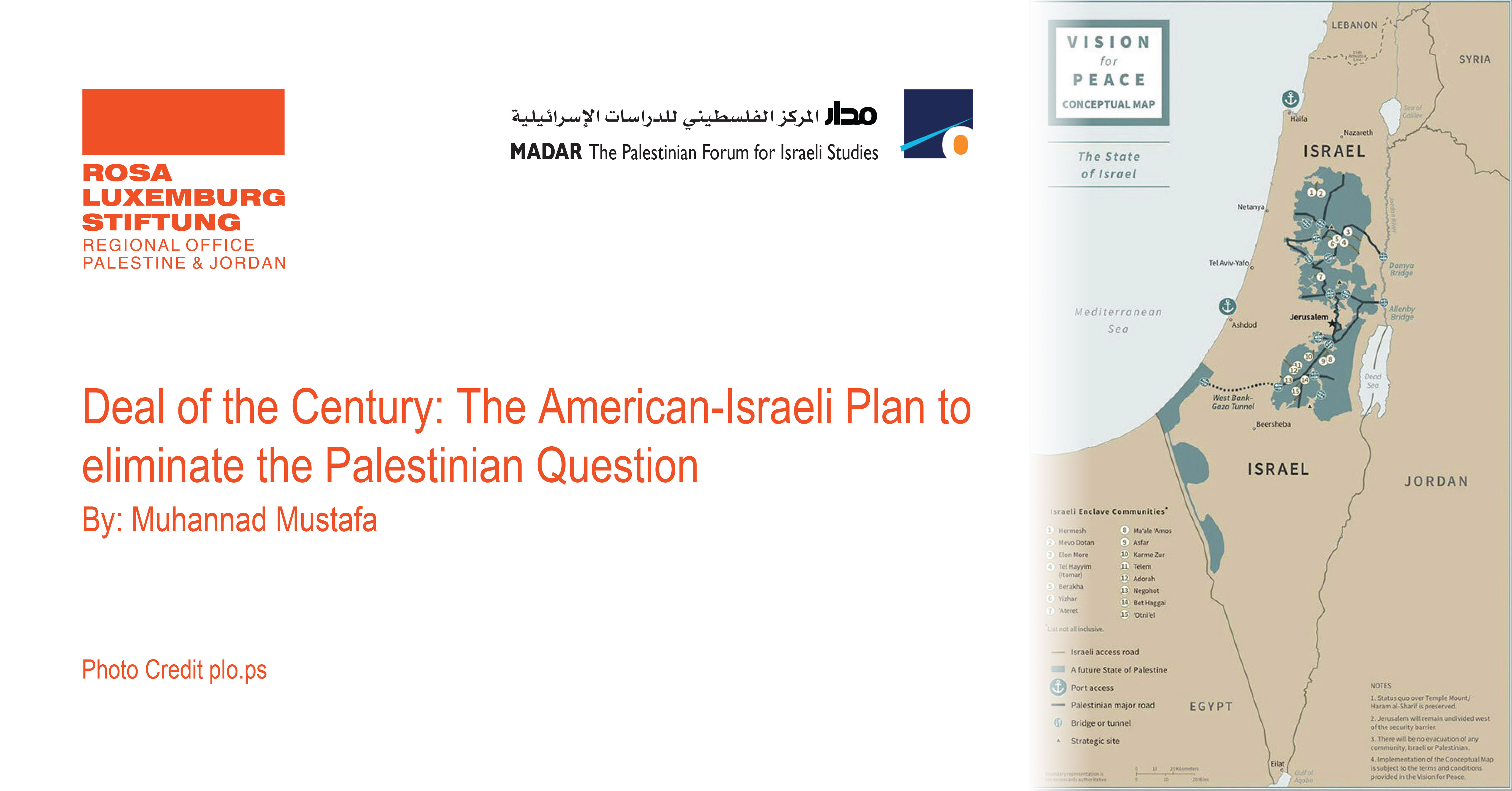 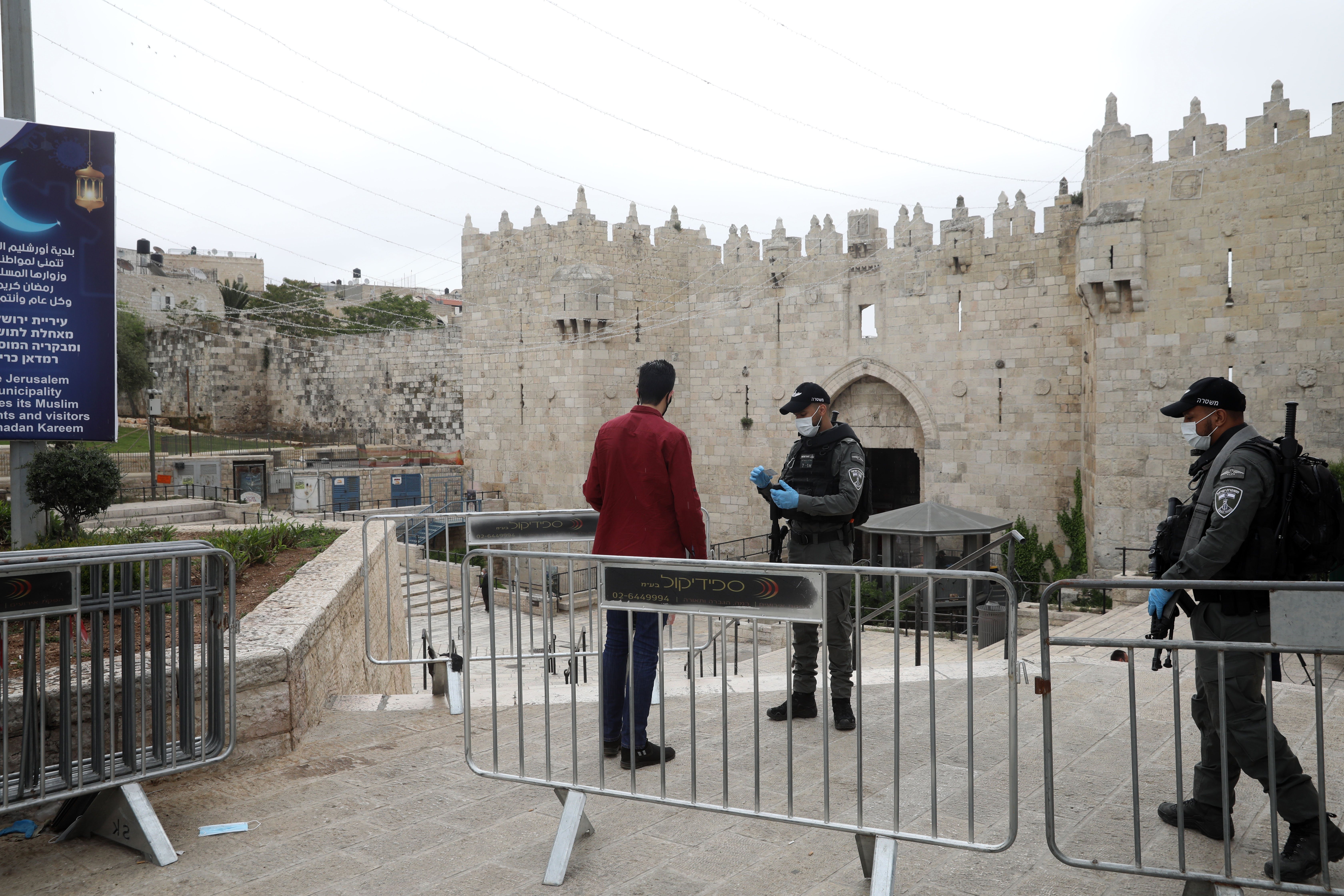