Israel and India: The Course of Relations and Future Scenarios 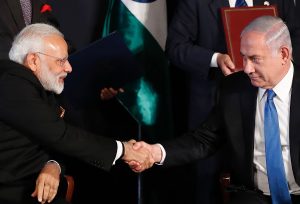 This study published by our partners, The Palestinian Forum for Israeli Studies (Madar), written by Dr. Mahmoud Fataftah,  monitors and analyses key indicators in India’s foreign policy over the past three decades, particularly after India initiated diplomatic relations with Israel in 1992. This shift coincided with significant structural transformations that resulted from the end of the cold war and break-up of the Soviet Union. As a consequence, international and regional balances of power changed. Globalization and liberalization have run deep in inter-State relations.

The importance of this subject derives from several reasons. In the first place, this study contributes to bridging a wide gap in knowledge in the process of investigating India as a civilization and political phenomenon. A limited number of Arab researchers, including Palestinians, have published in-depth, insightful, and analytical unbiased research on India, Indian internal political system, and parameters of Indian foreign policy.

Secondly, based on presentation and analysis, the study proposes a set of political and strategic recommendations on how to contain the growing relations between Israel and India. These ties have a significant bearing not only on the question of Palestine, but also on regional and Arab system as a whole.