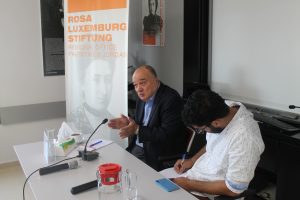 The Rosa Luxemburg Stiftung held a seminar last Wednesday entitled: The Deal of the Century: Between Reality and Contingency” at the Foundation’s headquarters in Ramallah hosting Dr. Nasser Alkidwa, a member of the Fatah Central Committee and Chairman of the Yasser Arafat Foundation.  Alkidwa spoke about recent political developments related to what is going on with regard to the deal of the century, the Manama workshop and the stances of the Palestine Liberation Organization (PLO) and its plans in confronting this deal.

Alkidwa started by speaking about the current US administration and its policies in the Middle East and its stances that are different from the previous US administrations. He said that the current administration has rejected the two-state solution, stopped its support to the UNRWA, recognized Jerusalem as the capital of Israel, upon which the US Embassy was relocated and opened in Jerusalem in May 2018.  He added that this policy is aimed at enabling Israel to annex more occupied areas in the West Bank and to legitimize settlements.

Commenting on the Israeli annexation of Palestinian land in the occupied West Bank, Alkidwa said that “the continuation and expansion of settlements is tantamount to ending the political settlement”, adding that “Israel wants annexation but it does not want to be responsible for the Palestinians living in annexed areas. On the same subject, he pointed out that soft displacement plans of the occupation state coincide with annexation and expansion  plans, including the issuance of an Israeli military order a few years ago making every Palestinian citizen a resident, in order to facilitate expulsion in the future.

Alkidwa commented on the weak popular participation to events announced by the Palestinian leadership in confronting the deal of the century and explained that this is due to lack of healthy relations between the people and the leadership.  He stressed that the leadership must regain people’s confidence through the validation of its declared positions.

For his part, Sari Harb, the manager of the Political Analysis and Networking Program, said that this seminar is organized within the framework of the Foundation’s endeavors to provide space for political and social dialogue.  “Given the importance of the economic and political implications of the deal of the century, we felt that more analysis and information contribute to the understanding of the Palestinian leadership position,” he said and added that “it is for this reason that we were keen to hold this seminar to bring together Alkidwa with activists and political actors from different levels.”

It should be noted that this seminar was held by the Rosa Luxemburg Foundation within the framework of its Political Analysis and Networking Program.  Rosa Luxemburg Stiftung is a German organization operating in Palestine since 2008 to provide political education, and considers itself committed to a radical perspective of enlightenment and social criticism. .  It sponsors networks of emancipatory political, social and cultural initiatives through a range of programs, including emancipatory education, economic and social rights, political analysis and networking.

Sari Harb, Director of the Political Analysis and Networking Program