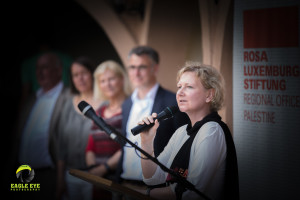 The Rosa Luxemburg Stiftung in Palestine bid-farewell to Katja Hermann who was heading the RLS Regional Office Palestine since 2012, and welcomed Ute Beuck as the new head of office, in an event that was attend by dozens of partners and friends of the Stiftung.

The afternoon was opened with panel discussion on: “Social Struggles in Palestine in the Context of Global Social Rights.” At the panel Ms. Christine Buchholz, Member of German Parliament for Die Linke (German left party), presented a paper on the possibilities of International Solidarity with Social Struggles. Ms. Eileen Kuttab, Associate Professor – Head of Women Studies Center at Birzeit University, and Head of the Board of Al-Marsad organization presented a paper on social rights as one component of national liberation struggle in Palestine.

The panel was followed by a reception with some greetings, which included Mr. Bernd Kuebart, Deputy Head of Office of the German Representative Office in Ramallah, who stressed the importance and uniqueness of the German system of political foundations and the Chairwomen of the Executive Board of RLS Dr. Dagmar Enkelmann, who thanked Katja Hermann for the achievements during her time as head of office and wished Ute Beuck much success in her new role.

Katja Hermann, who will continue her work with Palestine as head of the Middle East/Asia department at RLS headquarters in Berlin, expressed her gratitude to the office team and partners for their joint achievements and her trust that these efforts will continue with her successor. Ute Beuck, who has extensive experience in Palestine, voiced her happiness to be back in the country and her determination to continue with the development of the work that has been done so far by RLS partners and team both in Palestine and Jordan.

The ceremony was opened with traditional Palestinian songs played by DOUM band. Later on Ashtar theatre performed a well-received excerpt of their play “The last Supper in Palestine”.

The entire RLS team would like to thank all partners, network and friends that joined us at this event and is looking forward to the continuation of its fruitful cooperation.